Apologies to Heather by noon, Wednesday for catering

Next meeting will be held on Thursday, 29th June. 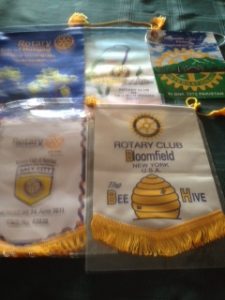 Attending the 2017 World Convention in Atlanta, Georgia, in the company of some 40 thousand Rotarians from throughout the World, was certainly a experience to remember.

From the opening session, through to the closing session, including the President recognition lunch and the Foundation Birthday function, there was the opportunity to gain greater knowledge of the work of Rotary in the World.

Pres. Bryan presented the banners he had been given during his trip to the US.

While being hosted by the RC of Bloomfield in Rochester NY, Bryan presented  RC Rochester banner along with our 50th Anniversary Book to the Club. Bryan had the opportunity of attending the CO Function at the RC Bloomfield, an occasion he described as rather casual.

Prior to his departure to the World convention, Pres. Bryan attended the District 9800 Gala Foundation Dinner in  Melbourne.

Subs for the forthcoming Rotary Year are now due and Treas. Noel would appreciate payment by the 1st meeting in July. (July 6th)