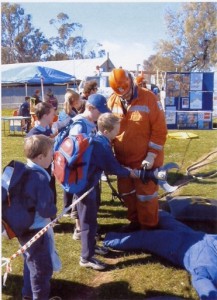 The Rotary Club of Rochester presented its first Farm and Road Safety Expo in 1999.

The aim was and continues to be the education of young people in safe practice on the farm and on the road.

The Expo is conducted at the Rochester Recreation Reserve and features a wide range of displays, some hands on and some static which cover Worksafe, motorcycles and four wheelers, boating, milk transport vehicles, farm equipment and machinery, bicycles, emergency services, road and cycle police, Neighbourhood Watch, Safety Houses and safe handling of animals, including dogs and horses.

The Annual Expo is conducted on the Third Tuesday of August

A highlight for many students was the McColl’s mobile truck simulator which allowed them to experience the challenges faced by the drivers on the road and around the dairy farm. Thanks were extended to the many volunteers who assisted in setting up on Monday and helping out during the event – approximately 369 volunteer hours was put into the running of the day.

The many evaluation forms returned by both exhibitors and participants expressed very positive comments about the event, its organisation and the safety message passed to the attending students.

The 22nd FARSE will be held on Tuesday 18th August, 2020 at the Rochester Recreation Reserve.