The home of the Rotary Club of Rochester 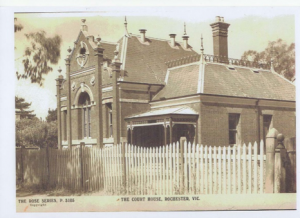 The Heritage Court House, erected in 1889, was the second Court House to be erected in Rochester, an important town along the Melbourne-Bendigo-Echuca railway line that opened in 1864. The three-roomed courthouse designed by the Public Works Department and built by T. Walsh, is constructed of red brick with polychromatic decorative detailing as well as cement rendered details such as parapets, chimney tops, orbs and emblems. Cast iron decoration adorns the ridge of the hipped and gabled slate roofs. The asymmetrical design has an entry at the side protected by a small timber veranda with decorative detailing. A fourth room was added at a later date.

The Court House closed in 1989. This building was used to house judicial proceedings from 1889 until 1989. It was then used by: the Department of Agriculture as an office and store; the Assembly of God Church as a place of worship; and the Rochester Historical Society for storage, before being taken over by the Rotary Club of Rochester. 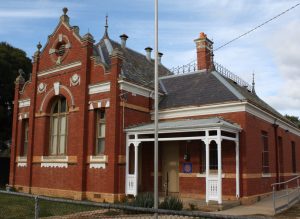 The Rotary Club of Rochester originally applied to The Shire of Campaspe to lease the Court House in 2006. When granted a 3-year lease with the option of a further 3 years, the Club spent time making improvements to the building and surrounds as per the lease agreement, as it had not been used for several years and was in a state of disrepair. In 2010 the Club applied to Heritage Victoria for a grant to start renovations to the building.

At-this-time, the Shire of Campaspe and DELWP (Department of Environment, Land, Water and Planning) and Heritage Victoria granted the Rotary Club of Rochester the status of Committee of Management for the former Court House.

The Club received a grant for $120,000 from Heritage Victoria to restore the Court House in 2010. Unfortunately, in January 2011 Rochester was inundated by flood waters and the Court House was surrounded by water which came up through the floorboards—it took almost 12 months for the foundations and surrounds to dry out sufficiently to commence renovation works. During this time plans were drawn-up, original quotes were ratified, and permits applied for to go ahead with the renovations.

The first phase of the restoration was underpinning the building. Due to the flooding, the cracks on the north west and north walls increased in size. The building had to be jacked up considerably, ensuring no damage was done to the antique brickwork. The building was underpinned in 12 different places and 90 cubic meters of concrete was poured.

The cracks in the walls around the building were repaired, slate tiles were replaced where necessary with tiles sourced from the same place as the original tiles. The wrought iron work was sand-blasted and powder coated.

A Shire of Campaspe flood grant was given to replace the floor throughout the entire building. The main room was prepared and painted by Club members.

In accordance with Heritage Victoria, Shire of Campaspe and OH&S, a new foot paths and disabled entrance were installed. This was done with exposed aggregate concrete to suit the Court House era and ambience.

The Club financed the installation of a commercial/community kitchen in the back room which is not under a heritage overlay. The kitchen was, I believe, given to ‘go-ahead’ by Heritage Victoria. The building permit was issued by the Shire of Campaspe.

The renovation work on the Court House, to date, were completed in 2015. The front veranda, window frames, doors and frames and paintwork on concrete feature are yet to be completed. Much of this work can be done in kind by members of the Rotary Club of Rochester and willing community members.

The Court House is available to community organisations to hire, and the Club would like to see it used as frequently as possible. The Club uses the Court House as its Club rooms and the Campaspe  CWA choir hold their practice there.

In conjunction with the Rochester Community House, a Community Garden is being developed and the Rotary Club of Rochester is putting in place a Street Library. Plans are in place to develop the area into a Community Hub for Rochester.

Bookings to use the Heritage Court House can be made though