Next Meeting: 3rd August when we will be putting labels on the FARSE showbags

District Governor Peter has commenced his club visits accompanied by not only Anne, but Oddball. We look forward to welcoming them to Rochester in November.

Assistant District Governor Jill took the opportunity to introduce herself to members and spoke of the Rotary Leadership Institiute and the New Members’ Seminar. 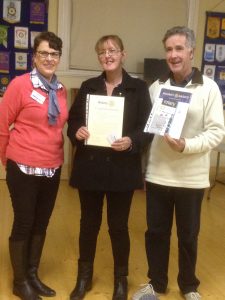 Over the past months Jenny has been a tireless worker at a number of the   club’s activities such as the Steam Rally, BBQs and assisting with Meals on Wheels. We look forward to a long and satisfying association as you now officially give Service above Self.

Bus Shed and Murals: Over the past months Sec. Heather & Treas. Noel have met with Campaspe Council representatives and have consulted with Heritage Victoria & the Department of Environment, Lands, Water & Planning. It is apparent from these consultations that the inclusion of the shed and the murals do not fit the footprint of the Court House Grounds and that building permits would not be granted. It has been decided that no further action be taken as to the placement of the shed and the murals in the Court House grounds.          Discussions are to be held with Shire Officers to determine the site of the shed while the Mural Committee is to be consulted as to the best location for the Club’s two murals.