Next Meeting will be held on Thursday April 27th. This is to be a Board Meeting & Directors are asked to have reports to Sec. Heather so that they may be included in the agrenda.

As PPs Heather, Noel & Rotary Partner Robyn can testify, too many tiny coffins have made their way past the Teachers’ House in Ainaro, Timor Leste. We have grieved with our dear friend, Celina on the loss of her babies and on each visit we have listened to the stories of our students, many of whom have raised younger siblings following the death of their mother. At the same time, thanks to the training of midwives by those such as Ballarat’s AVI Bernadette Cullinan and the birthing kits supplied by so many volunteers, we have rejoiced with many of our young friends on the safe arrival of their latest family member.

Thanks to all who helped out at the Bunnings BBQ on Sunday 9th April. Despite the weather conditions that saw us grabbing at the marquee before it disappeared across the car park, a tidy profit was achieved.

Meals on Wheels: RC Rochester has been rostered on duty this past week. Monday 26th June sees the commencement of the next rostered duty.

Sec. Heather has received information regarding Bowelscan Kits and has spoken to Brett Philips at Chemart. This item is to be discussed further at the Board Meeting.

In 1989, tensions flared in Bougainville undermining Papua New Guinea’s political and economic security. The ensuing insurgency not only closed the Panguna copper mine, it led to the death and suffering of a large portion of 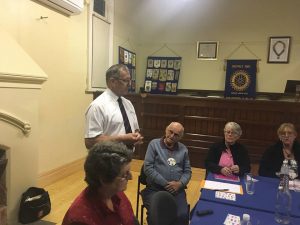 the Bougainville population. From 1997, the Australian Army, as part of a coalition of civil and military personnel from throughout the region, spent five years ensuring the maintenance of the ceasefire and the eventual peace process.

The Australian Army’s Operation BEL ISI was ground breaking for its development of trust between not just the military members of diverse countries, but also between civilians and the military. The initial New Zealand-led Truce Monitoring Group was made up of a coalition of countries—New Zealand, Australia, Vanuatu and Fiji—all with very different approaches to the task at hand. And to complicate matters further, in a gesture of trust all soldiers in both the Truce Monitoring Group and the later Australian-led Peace Monitoring Group patrolled unarmed. Over time, as both civilians and soldiers spent more time together and among villagers, trust and empathy deepened between the diverse groups. Bougainville villagers were able to take responsibility for the security of their visitors, building close relationships that enhanced both the peace process and confidence in the later elections.